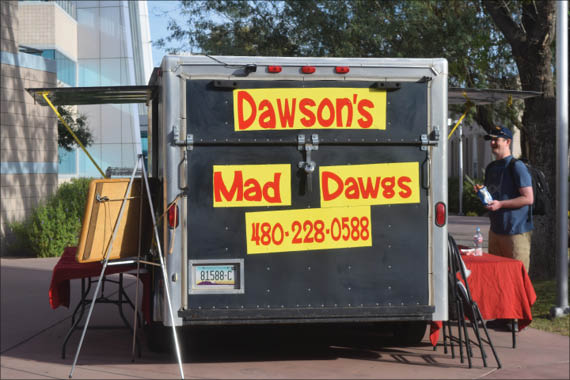 When students get hungry and have a hankering for a good hot dog they can count on Dawson’s Mad Dawgs.
Michael Dawson started vending hot dogs on MCC’s Southern & Dobson campus 6 years ago and has been serving them ever since.

Dawson left a career in mainframe operations analyses for the state of Arizona, a job that entailed fixing broken software, facing problems, and C7 scheduling. Dawson started selling dogs because he, “started hanging out with business owners and realized I wanted to do it. So, when I retired I dove in.”

After diving in, Dawson began to find success and now sells between 40 hot dogs and as many as 105 hot dogs in a single day on campus. The cart has recently been upgraded with new materials and a new trailer.

The trailer is registered as a type 2 pushcart and not a food truck based on the number of sinks. It has been inspected and certified to sell food on campus, but Dawson is still limited to hot dogs and cannot serve raw foods.The innovations in the new trailer allow him to start cooking much faster and cut down his set up time. The stainless-steel trailer was an investment of thousands of dollars into an ornate hot dog cart complete with ventilation fans.

There is more to come for Dawson’s trailer. He has plans to add ice chests and menu boards to the outside of his trailer. The menu at Dawson’s hasn’t changed much over the years. The andouille has been the only addition to the menu.
The andouille, a Louisiana chicken sausage, was only added to the menu because Dawson ran out of Polish sausage and bought the andouille to replace them.

Kathryn Yslas Mesa Legend If you want to change the world, the best place to start is a good Wi-Fi c
Read More
04/06/2017

“Get Out” was as good as expected