The Mesa Thunderbird baseball team enters 2017 as the No. 6 ranked team in the NJCAA DII preseason polls. The T-Birds return key players from last season’s squad that had a 43-18 overall record and 26-14 record in the ACCAC. Dual-threat first baseball/pitcher, Kody Funderburk, returns after having an impressive freshman season. Funderburk played in 54 games, having a .324 batting average with a .406 on-base percentage. He hit four home runs, two triples and eight doubles. On the mound, Funderburk started 13 games for the T-Birds. He had an 8-4 record with 46 strikeouts in 63 innings with a 4.86 ERA.

He had an 8-4 record with 46 strikeouts in 63 innings with a 4.86 ERA.Around the infield, Mesa returns shortstop Esteban Martinez, who played in 59 games last season. Martinez had a .370 batting average with 10 doubles and one triple. Drew Bailey, who played in 54 total games last year, returns as a utility infielder with Garrett Smith at second base, who played in 39 games. Jarred Crockett, Mesa’s speedy leadoff man, returns in the outfield for the T-Birds. Crockett had a .335 batting average last season with a .409

Crockett had a .335 batting average last season with a .409 on base percentage. He stole 19 bases last season and drew 21 walks. Hunter Bross returns in center field where he played in 60 games and batted .301 with four homeruns, eight triples and seven doubles. Chase Merriman will head the pitching rotation. Merriman started six games last season but made 18 total appearances. He had a 3.06 ERA in 47 innings pitched.

Closing out games for Mesa is Nick Ohanian, who had 13 saves last season, recording 54 strikeouts in 40 innings pitched. Ohanian has committed to Grand Canyon University next season. Mesa begins their 2017 season on Friday, January 27th at 3 p.m. against Benedictine University JV at Mesa.

By: Warren Younger The T-Birds Cross Country teams did well at the Embry Riddle Invitational over th
Read More 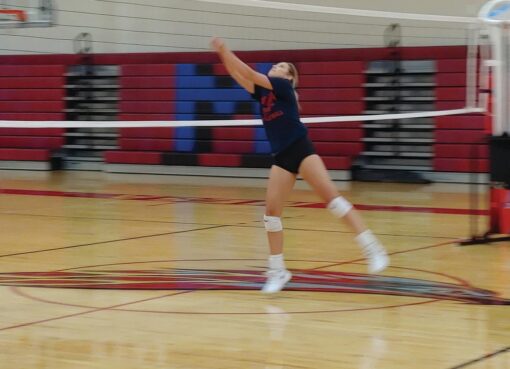 Kennadee Coplen has been playing volleyball since eight years old. At first she wasn’t as skilled as
Read More
01/20/2015

After blowing their late lead against the Central Arizona Vaqueras on Jan. 7, the Women’s Basketball
Read More