With one of the biggest math conferences in southwest coming and funds for math club running thin what better to fatten it up than with a pie.  On March, 14, also known as Pi Day for its abbreviated date stamp of month and day 03/14, the math holds a fundraiser that creates an opportunity to smash a pie in a 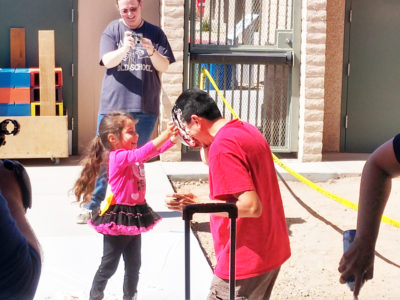 math instructors face.  This year they raised a whopping 603 dollars, which may not seem as much but luckily they only travel to the border of New Mexico which creates the opportunity to extend those dollars to multiple students wishing to go. The math club has attended the math conference since it started in 2003.

The Southwestern Undergraduate Mathematics Research Conference (SUnMaRC) is an event for math students to gain mathematic knowledge through presentations created by other graduate students. “Students from all over the southwest right now are working on math research projects,” Adam Avilez, about the SUnMaRC conference said. “Students go to get inspired.” The trip has some cost attached to it.  Groups like these often gain funding from student life services, but recently their budget has been diminishing.

“When I first started working here, student senate had a 40,000 dollar budget for travel but now it’s just like a 4,000 budget or 3,000 budget or something like that,” Avilez explained. Avilez cannot be more thrilled than with what the pi day fundraiser does for the math club.  “The whole department gets involved and students buy tickets. It’s a fun way the faculty has fun with it and I think the students have fun with it,” said Avilez.The fundraiser was launched in 2015 by math faculty and club advisor Michell Mazzucco.

“It has been a success and Adam the originator of the math club said it’s the best fundraiser they have ever had,” said Mazzucco. The pie-to-the-face of teachers are administered two ways.  One option is when a teacher produces the most raised funds and they get a full-on real cream pie to the face.  The second is a teacher can pledge a goal and if it is met they get a whip cream and chocolate pie tin. “We are looking to expand this with people who are tutors or other departments who would like to help the math department,” Mazzucco explained, “ we are looking to find a way to sell the tickets electronically.” The 2018 SUnMaRC convention is April 13 – 15 in New Mexico.  It rotates to different universities throughout the Southwestern states each year.

In recent months, there have been a number of lawsuits brought to courts around the nation, challeng
Read More
12/03/2015

Nikki Waldmann Mesa Legend Not only is Arizona known for the desert and hot weather, but it is also
Read More
04/15/2015