College football is back! Another season has come and we could not be any more excited for its long overdue. Performance definitely lived up to the hype delivering an extraordinary game where Mesa quarterback said “We felt really confident coming into this game.” at Phoenix College against the Bears. A total of 85 points were scored, and a combined 714 yards were run between the two teams. All the difference between winning and losing were going 12 yards in seven seconds giving Phoenix a one point victory when Eric Kump threw a touchdown pass to Quinton Garrett to finish the game propelling Phoenix to a 43-42 win over Mesa.

During the first half both defenses struggled to hold water as Mesa quarterback, Rathen Ricedorff, threw for three touchdowns in the first half as Phoenix Quarterback, Josh Eckley who suffered an injury late in the second quarter, threw for two and rushed for another touchdown. Yet both teams hurt themselves on offense, more Phoenix than Mesa.  Still the problems seemed to be universal, a common problem playing football early in the season.  Despite the toffensive struggle and because of the poor defense most of the scoring in the game occurred in the first half. Phoenix led 37-35. Mesa’s weak performance on special teams was a major setback allowing a touchdown on an 89 yard punt return by Damon Sheely and a poor choice by Darrius Aguire to return the ball on a kickoff pinned Mesa inside the five that caused a safety.

Both defenses came out and played inspired football in the second half leading to an almost scoreless third only allowing a Rathen Ricedorff five yard touchdown pass to Dionte sykes,who had three touchdown receptions on the night. Mesa held tight to their slim five point lead until late in the fourth quarter when Phoenix mounted a last minute effort to comeback leading to a dramatic finale ending in a loss shocking the Thunderbirds. The defense “falling asleep” as Coach Ryan said in the first half proved to be too much to overcome with the game being so close. 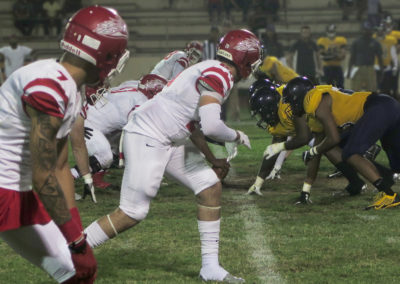 With an offense that suddenly fell asleep for the most part in the second half only prolonged the eventual shocker that would wake Mesa up as now knowing what needs to be tweaked just as offensive linemen Isaiah Moore said “ we will practice hard, listen to our coaches and we’ll be great!” Mesa Community College looks to improve on their 0-1 record and join the win column within the next two games for Mesa will visit 2-0 Snow College on Saturday September 17, 2016 at 12 PM and then at home in Mesa hosting Glendale Community College who has yet to play on September 24, 2016 at 7 PM.