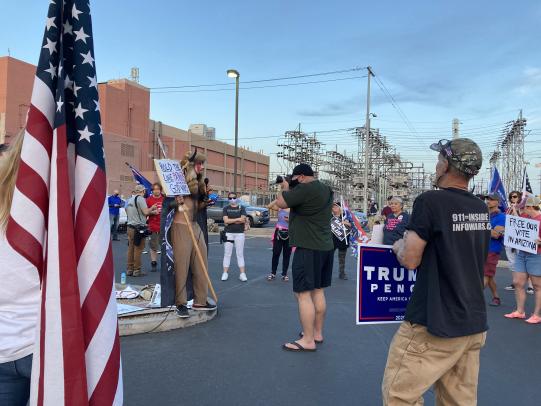 A Phoenix figure known as Yellowstone Wolf chants Q rhetoric at a protest in front of the Maricopa County Recorder’s Office while inside volunteers count election week votes. (Photo by Monica Spencer)

Roe-Sepowitz is an associate professor in the School of Social Work at Arizona State University. Formerly a social worker, she formed STIR, which has amassed an impressive database of research on sex trafficking available on their website.

“The biggest problem we’re having along with the Q stuff,” said Roe-Sepowitz, “is that these different groups have popped up and are now rescuing people all over the world–they’re not working with other agencies.”

Roe-Sepowitz cited the nonprofit Operation Underground Railroad (O.U.R.) as an example. “They rescue kids, pull them out, give them to social services and then get back on a plane to the U.S.”

O.U.R. publicly condemns conspiracy theories on its website, but it’s also received millions since the inception of QAnon, Roe-Sepowitz said. According to O.U.R.’s website, its CEO Timothy Ballard partnered with Glenn Beck, a conservative media commentator known for promoting conspiracy theories, on a child rescue in Thailand in 2017. And according to the Pew Research Center, 41% of Republicans–Beck’s main and target audience–favor QAnon.

Dr. Joseph M. Pierre M.D., a professor of psychiatry at the University of California, Los Angeles, explained that politics are at the theory’s core.

“QAnon is a political conspiracy ideologically aligned with the current brand of populist, nationalist and ‘far right’ conservatism that has taken hold of the Republican Party today,” said Pierre, who also writes for Psychology Today specializing in conspiracy theories.

The support from Glenn Beck might explain the whopping $30 million in donations to O.U.R. this year.

“$30 million for our victims could change everything,” said Roe-Sepowitz. “We need that money to house our survivors.”

Since Oct. 7, O.U.R. has been under investigation by Utah prosecutor Troy Rawlings. Roe-Sepowitz believes–and it has been reported by KSU-TV, also known as Channel 13 or Salt Lake Fox News–that suspected illegal fundraising operations by O.U.R. are at the heart of the investigation. Rawlings posted a since deleted Instagram post that hinted at this.

“Please beware of any individual, entity or organization who solicits your money and may be claiming credit for work to protect children that is actually done by our task force and/or other law enforcement organizations,” Rawlings wrote, which was picked up and reported on by Fox 13.

Meanwhile, organizations like STIR put an emphasis on children, which accounts for 60% of their research. They also train individuals to be cognizant of what trafficking looks like and what to do in those situations.

Stacey Sutherland is the program director of Phoenix nonprofit Training and Resources United to Stop Trafficking Arizona (TRUST AZ). Like STIR, TRUST AZ also provides facts and awareness on local sex trafficking. As far as misconceptions in their industry, Sutherland said that’s been politicized and fueled by the internet.

“For us who have been doing the work for a long time it’s kind of like, what? Where were you six, seven years ago?”

She said TRUST AZ has received many false reports in their general email, mostly linked to QAnon. Some of their messages cast unfounded suspicion on the recycled clothing store Plato’s Closet.

“They keep telling me that, ‘They’re having a percentage-off sale, and I think they’re human trafficking,’” Sutherland said, imitating one of many voicemails she received.

Sutherland tells these individuals to contact law enforcement, with which TRUST AZ closely works to fight human trafficking. She said law enforcement has told her that they’ve also received numerous tips that led to nowhere.

“The human trafficking hotline number, especially around the Wayfair incident, was inundated with calls that were fake,” Sutherland said.

In early 2020, rumors were spread across social media that the home furniture site Wayfair was behind a highly-organized child sex trafficking ring. One Instagram video circulated among QAnon believers suggested furniture was named after abducted children who could be bought online for a hefty price. This claim has been dismissed by numerous news outlets as completely false.

“If somebody was trafficked via Wayfair,” said Sutherland, “Victims would talk.”

But what hurts the movement the most, she said, are the people who don’t understand how human trafficking works.

“You’re gonna be looking at Wayfair for instance, and you’re gonna miss all the victims who are in plain sight right in front of you,” Sutherland said.

Los Angeles resident Seth Ilif said he pays the bills as a writer and director of commercials and music videos. He admitted he spends a lot of his free time feeding his fascination for QAnon. In our September phone interview, Illif said he spent several months looking into Satanic Ritual Abuse (SRA) testimonies he found on YouTube.

“The psychology community is well aware of the fact that SRA is a very real thing,” said Ilif. “It’s highly organized, and the reason it’s not brought up in public is because these people are hunted down like animals and killed if they start to speak out.”

Ilif said most human trafficking cases come from SRA, and psychologists have reached out to him online confirming this. When I asked for the names or contact information of these psychologists, Ilif claimed they were too fearful to speak to the press. Both TRUST AZ and STIR said his claims about SRA are false, and that most children are commonly trafficked from people they know who groom and manipulate their victims.

But QAnon adherent Ilif continued to argue that child sex trafficking stems from secret societies “tied to freemasonry” and is linked to the CIA.

“Conspiracy theories, which are endorsed by half of the population, are based on the core notion that authoritative accounts are not to be trusted,” said Pierre. “There’s plenty of ‘evidence’ for all manner of conspiracy theories out there in the form of deliberate disinformation for those who are looking for it.”

Ilif disputed what he calls ‘the media’s portrayal of QAnon.” He said that QAnon is “nonviolent” and “advocates for unification.” He said he strongly disagrees with a 2019 assessment from the Phoenix FBI that labeled conspiracy theories like QAnon a domestic terrorism threat.

“Probably the vast majority of those who identify with QAnon are unlikely to be violent,” Pierre said. “But there are certainly exceptions among ‘true believers’ who radicalize with a growing list of people who have become violent based on QAnon ideology.”

“To be honest,” said Ilif, “a lot of nonprofits are likely to say the same thing about Q–that it’s doing more harm than good.”

Following our initial interview, I reached out to Ilif via text message for a comment on quotes made by STIR and TRUST AZ that combated his claims on trafficking.

“Whether a human is farmed by the cartel or an art student is tricked into a program that ensnared them, it’s all the same thing,” Ilif wrote in a confusing paragraph. He emphasized, “All intelligence agencies are at the core running the show.”

He linked human trafficking of people coming across the Mexico and U.S. border to sex trafficking, something which Sutherland had said is a common misconception from people who have little knowledge about sex trafficking.

Dr. Pierre said the false conspiracy ideas behind QAnon that intelligence agencies like the CIA are behind issues like child sex trafficking take hold because there are “certainly top secret” government operations going on, as well as historic examples of real-life conspiracies.

However, he explained there is no evidence that the QAnon conspiracy theories have any basis in fact.

But that doesn’t bother Ilif. When asked about whether he supports nonprofits who purport to rescue child sex trafficking victims, he said without further explanation: “I’m part of Operation Underground Railroad.” 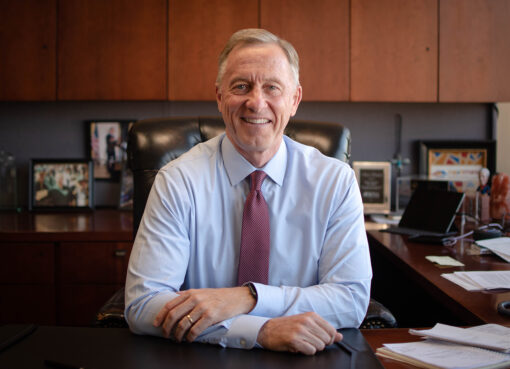 Controversy sizzles over ‘Fight for $15’ movement

Nikki Waldmann Mesa Legend For many years, people have been discussing the topic of smoking and its
Read More