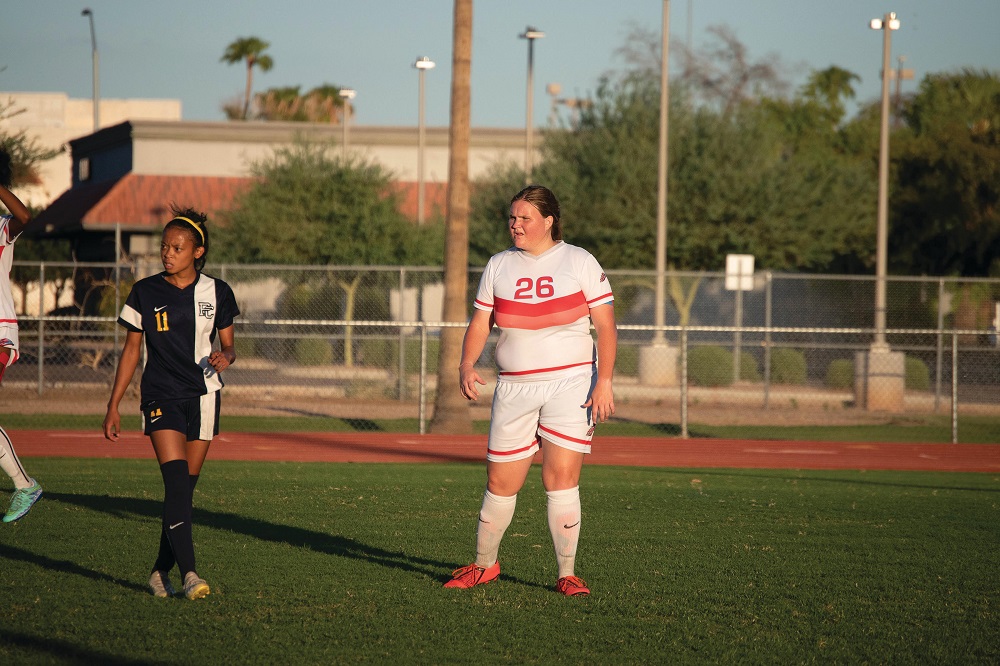 Caitlyn Waller has grown up around soccer players her whole life. Her father, mother, older and younger brother were all soccer players at one point. Now her father coaches and her older brother is a referee, leaving Waller to keep the family tradition alive by playing soccer at Mesa Community College (MCC).

She’s played soccer ever since she was a toddler and now she doesn’t know what her life would be like without it. “I had such a passion for [soccer]. It’s been my lifestyle since I was eight years old and I don’t know anything else,” Waller said. “I wanted to keep playing because I love being out there during practice and games.”

In high school, Waller was able to play for the varsity team and eventually grabbed a leadership role in her team. She didn’t play all that much until her senior year when she was switched into a starter position. “My coach saw me as a leader. We had our captain but he held all the seniors to a higher standard but it was definitely different,” Waller said.

According to Waller, before this time she would get 20 minutes on the field. “I wasn’t used to playing all the time… I had no idea what I was doing cause I was not used to that position.”

Waller is now completing her second year at MCC while also keeping up with the Women’s Soccer team as their centerback.

According to Waller, everything about high school to college soccer is different. She has more responsibilities now, which include not only having to work on her classes but also get up early to attend early morning soccer practices before classes even start.

The level of competition is also very different according to Waller, but it’s always fun with the girls on her team. “Outside of soccer I don’t think I would have been friends with [my teammates] but having the one interest that brings us all together is awesome too,” said Waller.

In all, she believes soccer has shaped her for the better.

Waller also doesn’t see herself giving up the sport anytime soon. She’d like to transfer to a four-year university, hopefully out of state, and continue to play. In the future, she’d like to be a coach or a professional soccer player.

“Ever since I was little I’ve wanted to be a professional soccer player so hopefully, but we’ll see,” Waller said.

Waller finds inspiration in the Phoenix based soccer team, Phoenix Rising. She attends their games and even travels to their away games just to watch them compete. “I think that whole organization is just so inspirational to me and I look up to all of their players.”

Watch Caitlyn Waller and the rest of the Women’s Soccer team this season until Nov. 9. Their schedule, as well as all other MCC sports schedules can be found on page 13 in the MesaCC Legend and online at www.mesatbirdsports.com

Season overall a success as year ends for MCC soccer