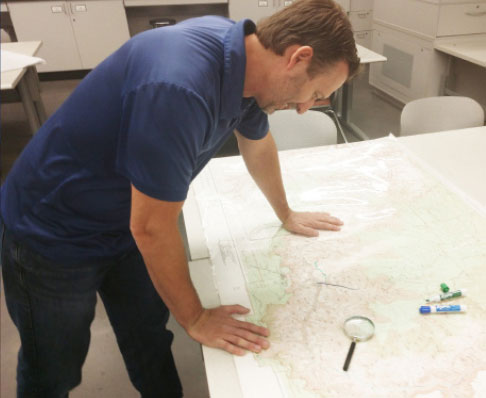 Mesa Community College (MCC) makes it possible to explore one of the seven wonders of the world. GLG121 Geology of the Grand Canyon is a hiking and camping class that takes students to the Grand Canyon. This is the third year the course is offered.  “We don’t just hike the canyon we take stops along the way to the canyon,” Luther said. “Usually we do one on the way there and one on the way back, and they vary every semester.” The class is a three-day weekend camping trip. That starts at the south rim and the group walks along one of the half a dozen trails. “We try to do a different one each time,” Luther said.  In the past students have explored Cinder Cone, Lava Tube, Sunset Crater National Park, and the San Francisco Peaks. Luther added that the exploration is for all levels of experience.

“It is a good intro class because you are not doing the hard-core camping stuff. People can bring lots of gear and not be worried that they are going to be in the middle of nowhere,” Luther said. MCC had a similar program in 2002, where a group of students traveled various locations in Northern Arizona, Death Valley, and Mexico. The program was canceled in 2012 due to budget restrictions.“In spring of 2016, I [was able to] offer the Grand Canyon class and we have continued that every semester up to the present,” Luther said. The course is a one-credit class with an additional fee applied toward equipment students use on the trip. “We provide food, kitchens, stoves, and we can occasionally provide some gear,” explained Luther. Mather campground, south rim of the Grand Canyon has flushing toilets and running water and store nearby. We are never far from amenities,”

Luther said George Juarez is a geology student at MCC who has taken the Geology of the Grand Canyon. He said “The cost of the class and the fee gave him the opportunity to visit a national park,” something he wouldn’t be able to do and afford if he did it alone.  “I lived here for three years and haven’t seen the Grand Canyon so I was like, hey, this is $80 I can spend and get a ride,” Luther said he is happy with where the Grand Canyon trip is right now and has had a great experience each year. He wants to continue to promote an interest in geology among MCC students.  Course instructor Luther said everyone is welcome to register “there’s a new adventure every time.”