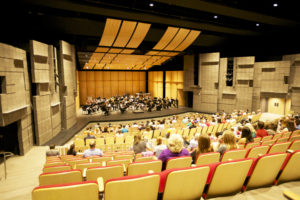 Mesa is one of the most artistic towns in America according to Expedia, and the Mesa Community College (MCC) Performing Arts Center (PAC) is among the reasons for recognition. Travel writer Lily Rogers highlighted for the second year her favorite cities to visit with “thriving art communities.” In her article “America’s most artistic towns” she listed Mesa among the 26 best locations this year. When highlighting the center she wrote the MCC PAC “stages a wealth of music, dance, and theater.”  The travel booking website used several criteria to selecting the towns. First, they were divided by population: less than 20,000 is considered the smallest town with a mid-city ranging from 100,000 to about 350,00 and the largest cities can have as many as a million people. The selection process also included identifying places with “creative festivals, top art schools, cutting-edge productions, dynamic street art, and generous community support and patronage.”

This is the first time in the two years that any Arizona city has been spotlighted. “Mesa may be located in the arid desert, but its cup runneth over when it comes to access to the arts,” Rogers wrote.The MCC art gallery, located further inside the campus, is a bright spot in Roger’s evaluation for promoting the student’s art inside.  The Mesa Arts Center is featured for the space it gives to artists to create and perform, like the WorldPlay cafe (an open mic for poetry, storytelling, and music), the many performing and studio classes, theatre shows, musical concerts and art exhibits that line the area throughout the year. Alongside the Mesa Arts Center, Mesa Contemporary Arts gallery and the i.d.e.a. Museum were spotlighted as well for their exhibits and promotion for learning. “For all their efforts, both recent and historical, these are the cities we’ve found are most contributing to the artistic culture of our country,” Rogers closes out.